Eagle Radio Local Heroes Award are organised by the local radio station in Surrey and North East Hampshire.  They are awarded to local people of have done something worthwhile be it volunteered in their community or inspired others in sport. There are 10 awards one of which is the Sports Award which Matthew this year was awarded. 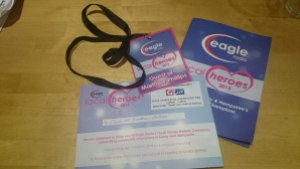 The Award Ceremony was held at our local entertainment venue G-Live. We were invited to a VIP Reception before the main event and I all I knew was that I had been nominated for an award. We arrived and went into a side room where the other winners and the sponsors of the Awards were socialising. There were the evenings brochure on each table and whilst looking at one I found out that I had not just been nominated I had won the Sports Award. This was a complete shock.

After something to eat and drink we were a 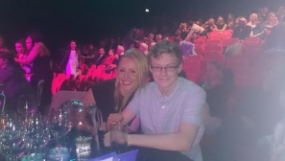 At the table with Award sponsors Cancer Partners

ll directed to take our seats in the auditorium. There were 10 round tables set out at the front where the 10 award winners, their guests and award sponsors were to be seated. Another surprise met me when I saw a number of my friends from the climbing squad, coaches and family had got tickets to be in the audience.

The awards were handed out mixed with entertainment from Bars and Melody, Scouting for Girls and others. My turn soon came round and I made my way on stage and was presented with my award by the Chairman of a local football league club Aldershot Town and influential businessman Shahid Azeem.
It was a great evening and I hope the publicity on Eagle Radio has encouraged some people to give Para climbing a go when they thought it was not possible.
September 30th, 2015 by Matthew Phillips

A Short Film by Teri Limongi